‘Don’t waste your money on ‘shoddy’ new builds’: Kirstie Allsopp warns buyers not to be fooled by ‘misleading’ claims about the ‘hidden costs’ of old houses

A row has erupted over the quality of new build homes after TV presenter Kirstie Allsopp told today’s buyers to avoid wasting their money on ‘shoddy’ properties.

The 45-year-old spoke out after ‘misleading’ claims by a new build organisation that those in older properties were likely to spend more than £51,000 on repairs. 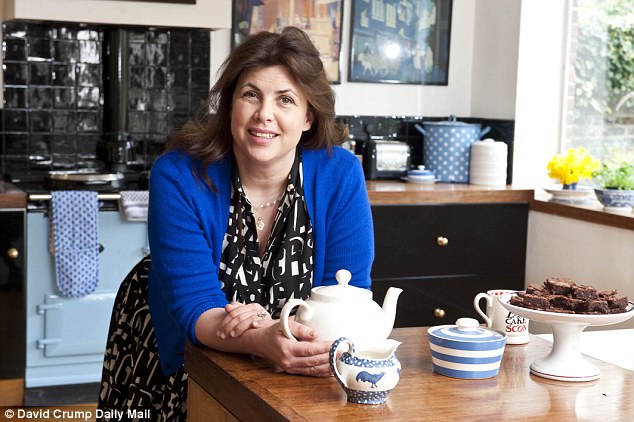 TV presenter Kirstie Allsopp, pictured in her home in West London, has claimed some houses built from the late 1980s are poor quality, more prone to flooding and built for the short term

But the Home Builders Federation has hit back, saying buyers of new build homes ‘enjoy a huge number of benefits over those purchasing a second hand home’.

The disagreement began when the New Homes site, which the HBF developed, tweeted a diagram of an old house with annotations of the cost of repairs.

Its graphic suggested homeowners would need to spend about £6,000 on the central heating, £5,000 on windows and doors and £4,000 on external rendering.

Its tweet read: ‘Avoid the money pit and buy new, or you could find yourself spending up to £51,643 on upgrading an older property to the same standard.’

But Allsopp was enraged by the claim, saying: ‘I intend to complain to @ASA_UK (the Advertising Standards Authority). This is totally misleading and untrue.’ 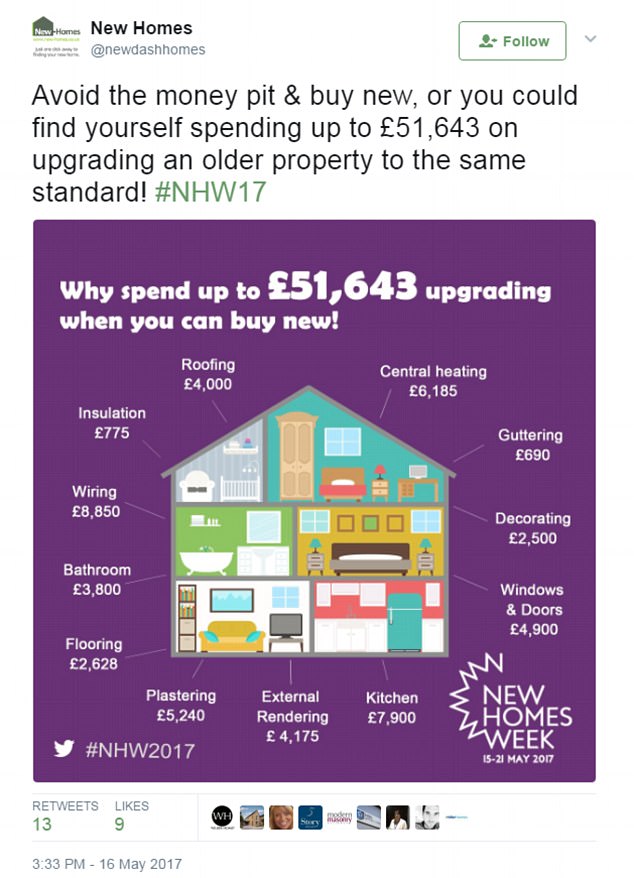 The disagreement began when the New Homes site, which the Home Builders Federation developed, tweeted a diagram of an old house with annotations of the cost of repairs

Allsopp, who presents the Channel 4 show with Phil Spencer, said the prices were both inflated and unrealistic because nobody would fix their whole home at once.

She told The Times property assistant editor David Byers: ‘I have seen some really shoddy new builds. Something being new is no guarantee it’s any good.

‘I think it is misleading and irresponsible. I go up and down the country and I am seeing a lot of older properties that have been standing for 150 years or more.

‘I do not know the last time I saw a new build that I thought would stand for 150 years. I don’t think I have.’

In March it was claimed 298 families a week are having to move into shoddy new build homes that have not been finished as builders cut corners to meet targets. 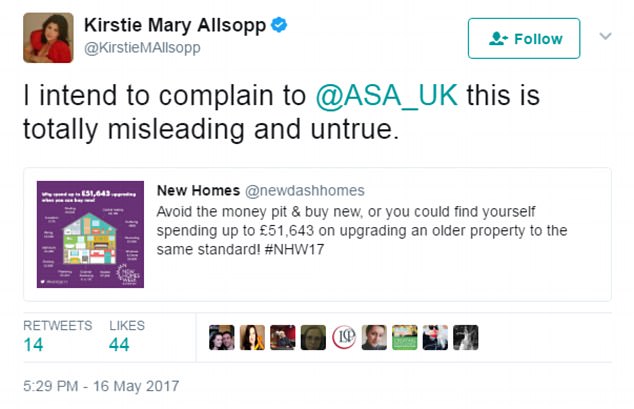 Allsopp claimed the prices were both inflated and unrealistic because nobody would fix their whole home at once. She tweeted that she would report the post to advertising regulators

In some cases, new build buyers are discovering more than 170 faults in their homes and having to wait months for a builder to fix them. 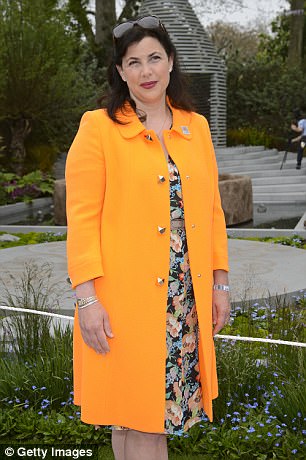 But HBF executive chairman Stewart Baseley said: ‘Buyers of new-build homes enjoy a huge number of benefits over those purchasing a second-hand home.

‘During the buying process customers will receive a high level of service and support from trained sales staff.

‘Upon moving into a property that is designed for modern living there are all the advantages of living in a home with brand new fixtures and fittings and the latest energy efficiency technologies.

‘This report helps to highlight the hidden savings that buyers of new-build homes make. While most people have a budget put aside to get the little jobs done, costs soon add up when you need to replace a bathroom or a kitchen.

‘£50,000 is a lot of money by anyone’s standards and this new research emphasises just how much new build homebuyers really get for their money.’

The graphic formed part of an HBF report that claimed the cost of upgrading an older property to the same standard as a new build home could be up to £50,000.

And an HBF spokesman told MailOnline: ‘The overwhelming majority of people living in homes built in the last 30 years are very happy with their home. Surveys show that more than 90 per cent of people would buy new again. 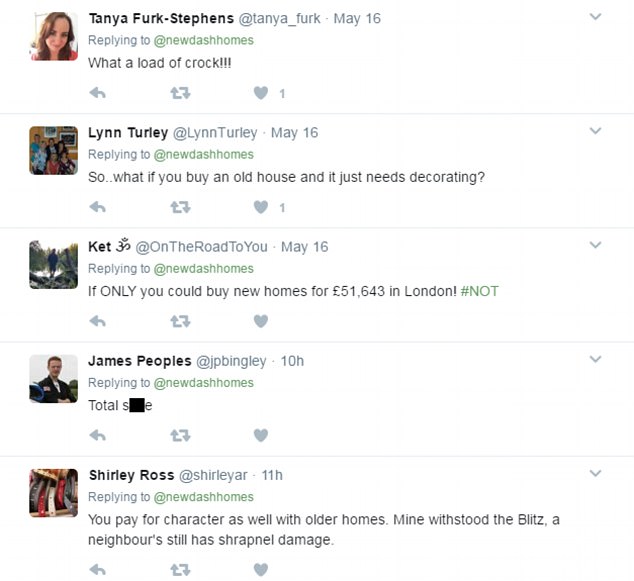 ‘The report simply highlights the various costs of installing new features, fixtures and fittings that come as standard in new builds and are valued by households.

‘Not everybody wants to move into a Victorian home and undertake expensive and time-consuming upgrade work.’

‘New builds today are built to extremely high standards and designed not only to stand the test of time like their Victorian counterparts, but also save households hundreds of pounds a year on their energy bills.

‘Of course, some people with large budgets and plenty of time may prefer to rebuild or renovate an older property but demand for new homes demonstrates that buyers value the benefits – and savings – that come from buying new.’

‘Any suggestion that new homes are more at risk from flooding that second hand homes is thus simply wrong.’

An ASA spokesman told MailOnline today: ‘We haven’t received the complaint as yet. We’ll be on the lookout for it and will assess it once it comes in to establish whether there are grounds for further investigation.’

But seven months later in March, work to correct a ‘snagging list’ running to 12 pages had still not been finished. 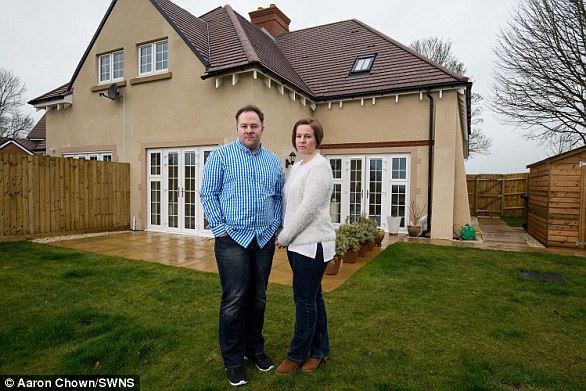 Steve Antonio and Andrea Fisher waited seven months for their brand new £390,000 home in Bishops Itchington, Warwickshire, to be repaired

The couple said their £390,000 house in Bishops Itchington, Warwickshire, was rushed to the point that much of the interior needed replacing, including plasterwork and all the internal doors.

There were problems with the lead guttering, causing water to pool on the roof, and a pipe could not be accessed.

Although completion was supposed to be last May or June, Miss Fisher, 41, and Mr Antonio, 38, were unable to move in until August. 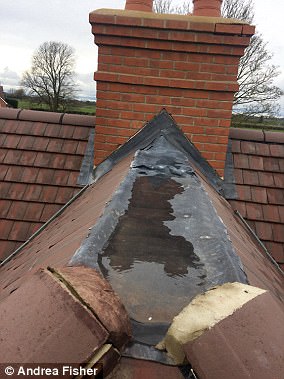 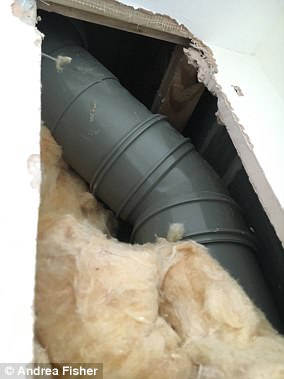 Miss Fisher said last March: ‘We’ve been left to live in a house that isn’t fit for purpose and should not have been sold to us in the state it is in.’

Cala Homes said at the time that it had apologised to Miss Fisher and her partner and was working to put right the defects.

‘We expected it to be our dream first home’: Couple tell how their washing machine ‘danced across the kitchen’ and builders left mouldy coffee cups behind 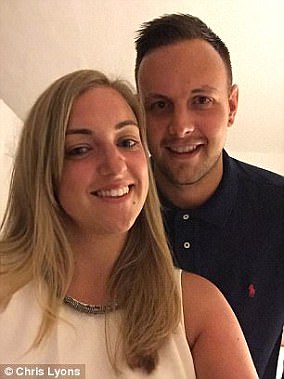 Chris Lyon, 29, and his partner Emma Hayward, 27, bought a Barratt Homes new build on the Ridgeway estate in Dunstable, Bedfordshire for £325,000 and expected it to be their ‘dream’ first home.

But the dream soon turned to a nightmare as the property was riddled with a catalogue of problems.

Mr Lyon told MailOnline: ‘On our tour of our home on completion day the house was full of dust, builders tools and mouldy coffee cups. Our front door glass panel was cracked.

‘Our washing machines transit bolts hadn’t been removed and upon using this on our first night we were awoken to the sound of horrendous banging, where the machine had literally danced around the kitchen, smashing the cupboards, kick boards, and plates that were on the sink side. 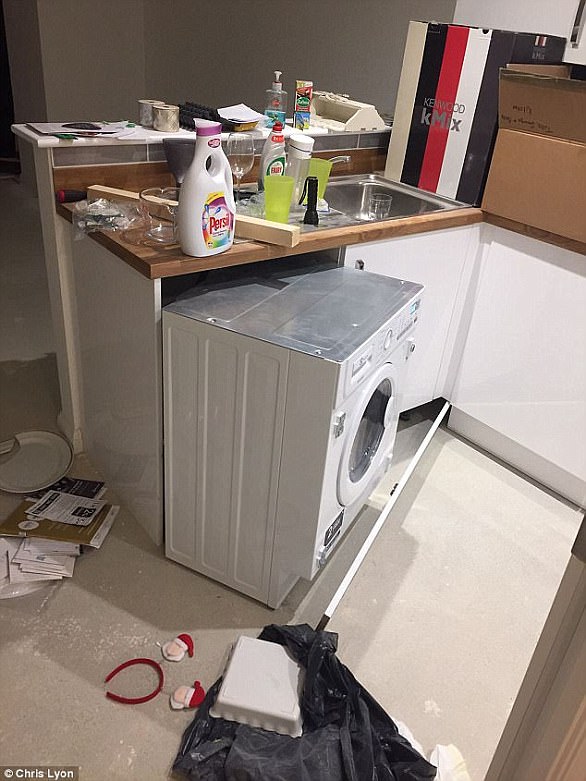 The couple were awoken to their washing machine ‘dancing around the kitchen’ on the first night in their new home – smashing cupboards, kick boards, and plates

‘Our garden patio was stained with builders’ paint and plaster.

‘Our electric shower hadn’t been sealed in where the electric power cables connect to it and the Virgin Media cables were hanging out of the front of the house as the builders had smashed the box off the wall.

‘The ducting that comes off the bathroom extractor fan is damaged and therefore just leaking moisture into our loft space.’ 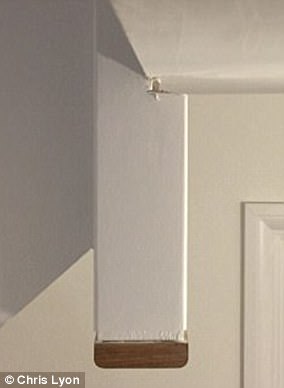 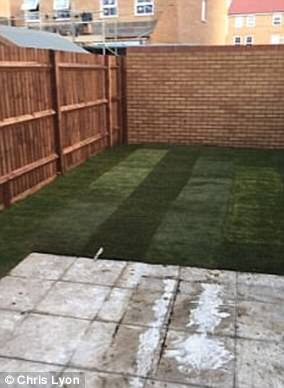 They bought a Barratt Homes new build on the Ridgeway estate in Dunstable, Bedfordshire, for £325,000 and expected it to be their ‘dream’ first home

The couple were faced with dozens of other issues including an uncapped pipe in the loft which left the house smelling of faeces, a window ledge cracked in half, and paint all over the fittings and radiators.

Mr Lyon added: ‘We had Barratts staff using our toilets when they came to rectify snags, leaving lights on, spilling paint on the new carpets, plaster on the sofa and carpets, and actually breaking our sofa. 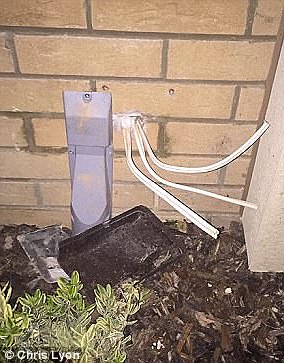 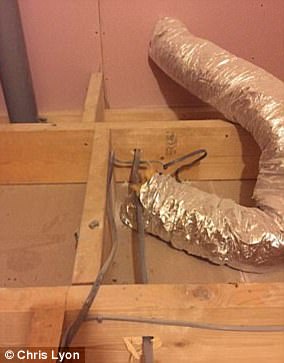 ‘The tiles in the house were not the tiles we originally chose when we purchased the property and the tiling in the en suite bathroom was horrendous.

‘I am a believer in getting people’s stories heard so people in the future do not have to go through this sheer hell.’

A spokesman Barratt Homes said in March: ‘We are aware of the issues raised, our MD Ian Sadler has already met with the customers, and we currently have workmen in the property resolving any outstanding issues’.